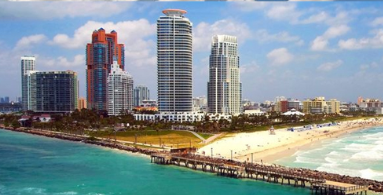 Condos for Sale in South Beach

Search all South Beach homes for sale below. South Beach Miami is a trendy neighborhood sandwiched by the Atlantic Ocean and Biscayne Bay. Known for its playful vibe, South Beach is an emerging haven with plenty of beachfront residential and commercial properties.

Be sure to sign up for a free account so that you can receive email alerts whenever a new South Beach home (that matches your criteria) is listed in the Miami Beach MLS.

Located east of the city proper, South Beach covers all the Miami Beach barrier islands south of the Indian Creek. It is the first Miami Beach section to undergo development in the early 1900s. The construction of the Collins Bridge connecting the Miami mainland to the beaches sparked the influx of residents and businesses in the area.

Once a farmland, the neighborhood of South Beach began many developments as early as 1912 when the Lummus Brothers acquired and converted 400 acres of land to an oceanfront city of single family homes. By 1930s, an architectural revolution occurred in South Beach.

Most of the homes follow Streamline Moderne, Nautical Moderne, and Art Deco architectural styles, but much of it were lost to developers before 1980. A cohesive unit of properties saved by the efforts of historic advocates and is now part of the National Register of Historic Places.

1989 saw the rebirth of commercial developments in the area, with a host of fashion agencies building their offices in South Beach. Today, South Beach is among the wealthiest neighborhoods in the area with many investors choosing to live in upscale condominiums worth millions.

South Beach is a go-to destination of tourists because of its proximity to the Miami International Airport and its easy access to the bustling neighborhoods of Miami Beach, Key Biscayne, and Coconut Grove.

Airport-Beach Express also brings commuters from the Miami International Airport to major South Beach points. Even these public transportation are available; most of the residents in South Beach go around the neighborhood by bicycle, motorcycle, walking, or roller blading.

The neighborhood is also home to a number of parks including Collins Park, Flamingo Park, Lummus Park, and South Beach Park to name a few.

South Beach is a major entertainment destination where activities know no sunrise or sunset. Its beaches are a favorite among European tourists who enjoy topless sunbathing. It is also known for the colorful lifeguard towers that complements the neighborhood playful vibe.

The Venetian Causeway is a famous bicycle commuter route for those who want to go to Downtown from the neighborhood.

Surely residents will never run out of things to do in South Beach. For a relaxing day, they can choose to watch performances in any of the theaters within the neighborhood including Lincoln Theater, Miami City Ballet, Jacki Gleason Theater, New World Center, Regal Cinemas South Beach, and SoBe Institute of the Arts.

The most popular street in the South Beach neighborhood is the Washington Avenue where the world’s largest nightclubs, Cameo and Mansion, are located.

South Beach has popular entertainment streets lined with quirky shops and dining options. Lincoln Road is a pedestrian-only shopping street once known as an arts and cultural center. It has since evolved and became one of the neighborhood’s trendiest streets hosting a number of specialty shops and fine dining options.

West Corridor Avenue bounded by Alton Road and Biscayne Bay are where most of the residential neighborhoods are. The corridor now has a mix of single family homes, original Art-Deco buildings, and a collection of mid-rise and high-rise condominiums.