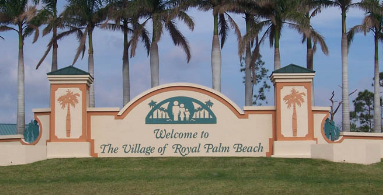 Be sure to sign up for a free account so that you can receive email alerts whenever a new home (that matches your criteria) is listed in the Royal Palm Beach MLS.

Before it was incorporated as a city, Royal Palm Beach was an uninhabited swamp and a favorite hunting ground of the Seminoles.

When Sam and Hattie Friedland purchased 65,000 acres of land in 1950s that the area was developed to become a residential haven. Its natural wilderness beautifully combined with housing developments. It received its incorporation on June 18, 1959.

The Friedlands eventually sold their property to Arthur Desser who furthered the developments in the area. Desser chose the name Royal Palm Beach because he was so impressed by the royal palms of Palm Beach.

It is surrounded by the neighborhoods of Loxahatchee to the north, Golden Lakes to the east, Wellington to the south and Loxahatchee Groves to the west.

The village used to have its own Police Department with 50 sworn officers and employees. To afford savings to the village, the policing duties were then contracted to the Palm Beach County Sheriff Department.

For its impressive cultivation of greenery and trees within the village, Royal Palm Beach is recognized as a Tree City USA since 1990.

Palm Beach International Airport is only 25 minutes away from the village via the US-98/Southern Boulevard.

The neighborhoods of West Palm Beach and Lake Worth are less than 30 minutes away by car.

The village is known for being a bird sanctuary. The community is also home to numerous parks such as Commons Park and Seminole Palms Park.