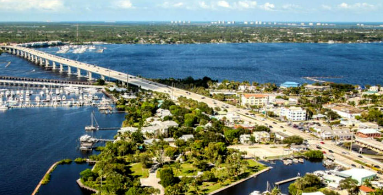 Be sure to sign up for a free account so that you can receive email alerts whenever a new home (that matches your criteria) is listed in the Port St. Lucie MLS.

Before Port St. Lucie became a city, it was an uninhabited area of White City. It only has few businesses and farms near the highway. Residential development began when General Development Corporation (GDC) developed an area of St. Lucie River. The construction of a bridge allowed cars to gain direct access to Port St. Lucie.

In just a span of three years, the area was home to 250 properties. This has pushed GDC to request for the area’s incorporation, which was granted on April 27, 1961. With Core Communities acquiring areas in the neighborhood, the property development boomed in the early 1990s.

Residents of the city are served by the St. Lucie Transportation Planning Organization, which operates buses with routes within Port St. Lucie and the nearby Martin County.

The city is surrounded by the neighborhoods of West Palm Beach, Fort Pierce, Stuart, River Park and White City.

The community is home to many key destinations. Port St. Lucie is home to Savanna’s Preserve State Park located along much of the Atlantic Coast between Fort Pierce and Jensen Beach. Residents often fish and ride their bikes along the shores of the beaches. The park also has a pubic trail spanning 13 miles from Jensen Beach Boulevard going to Easy Street.

Fort Pierce Jai-Alai and Poker is also a favorite spot among gaming enthusiasts.