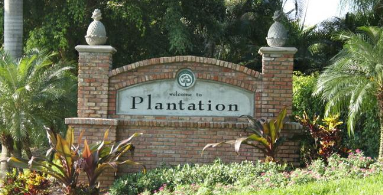 Homes for Sale in Plantation

Search all Plantation homes for sale below. Located in the southeast area of Broward County, Plantation is a master-planned city with diverse cultures and small-town charm within an urban location.

Be sure to sign up for a free account so that you can receive email alerts whenever a new home (that matches your criteria) is listed in the Plantation MLS.

To escape the harsh Midwest winters, Frederick Peters bought the area from the Everglades Plantation Company and moved his family to South Florida. Peters then commissioned Architect Russell Pancoast to build the master plan of the city that strictly included an ordinance that separated commercial and residential establishments, restricted minimum lot sizes and even prohibiting adjacent homes from having similar home designs.

Peters enticed home buyers to purchase long acres of lots with about two-thirds of the lot solely for cultivating gardens and fruit-bearing trees.

The neighborhood was incorporated on April 30, 1955. An old feed warehouse served as the venue for the first council meeting and was later on used as the site of the first City Hall and the Fire and Police Department.

When the police department was first organized, there was only one officer who would go on an 8-hour duty and stand-by for 24 hours a day.

The Plantation Volunteer Fire Department was made possible through the efforts of the residents. Cost of training and equipment were offset by holding barbecue fund raising parties.

Due to the city’s small town appeal and strong sense of community, the population continued to swell in the 1970s through the 1990s. As a response, the land on the west area of the community was annexed to Plantation.

Today, Plantation is home to a number of commercial and industrial establishments that serve as the city’s major source of employment.

It is true that while Miami is teeming with good golf course communities, Fort Lauderdale prides itself by having The Plantation Preserve Golf Course and Club, which features an 18-hole championship golf course, Everglades-inspired wetlands, a complete and beautiful clubhouse, advanced practice facilities and private Member’s only practice area, a 1.1 mile multi-use trail and expansive park system.

There are two signature parks within the city – the Plantation Woods, a forest theme park with a water playground and Camp Everglades at Plantation Acres at Volunteer Park.

Plantation is home to over 85,000 residents coming from 55 diverse cultures. The city has a median age of 41 years old, with most of them still employed in many of the industrial businesses within the community.

Plantation is home to a number of villas in gated communities and apartment complexes that offer the best views of the city.