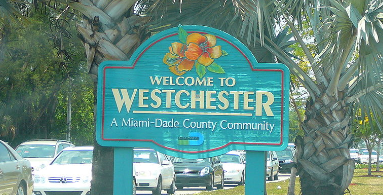 Homes for Sale in Westchester

Search all Westchester homes for sale below. ﻿Westchester is an enclave that is in the middle of it all, with popular neighborhoods like Doral, Coral Gables, and Coconut Grove just a short drive away.

Be sure to sign up for a free account so that you can receive email alerts whenever a new Westchester home is listed in the Miami MLS.

The census designated place called Westchester is located right next door to University Park to the west, Fontainebleau to the north, West Miami to the east, and Olympia Heights to the south. This enclave is shaped like a square, and stretches from Tamiami Trail to Bird Road, and from the Palmetto Expressway to SW 97th Avenue.

This CDP is considered a suburban neighborhood, and as of the last census, has a population that is nearing the 30,000 mark. The people in this community are mostly of Hispanic descent, which may be why 87% of the populace speaks Spanish.

More than half of the residents here are married, and there are more women in this neighborhood that there are men, with the ratio being 9 men to 10 women. The area is also a place where many retirees choose to live, followed closely by people in their fifties.

Residents who have lived here a long time chose to stay because of a number of reasons, and these include the neighborhood’s cleanliness, peacefulness, and closeness to the many fun and exciting areas of Miami without it being too close.

Westchester is a suburb that enjoys its closeness to many exciting places like Doral, Coral Gables, and Coconut Grove while still maintaining a quiet atmosphere. This does not mean however that you have to go to these places for entertainment and good food. Westchester also has numerous retail outlets, parks, and restaurants for people to go to.

Westchester is a neighborhood that is quiet and welcoming to those who want to live in the suburbs away from the hustle and bustle of city life, but without being too far from the excitement that these urban areas have to offer. Located just south of Doral and northwest of Coral Gables, this is one enclave that you can choose to live in if you want the convenience of the city nearby while still being somewhat detached from it.

Most of the homes in Westchester are single-family homes, with a mere 13% of the residences here being considered part of a multi-unit building or residential area. This means that there are just a few apartment buildings in the community.