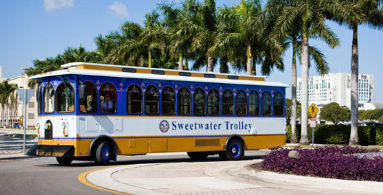 Homes for Sale in Sweetwater

Search all Sweetwater homes for sale below. ﻿Sweetwater is a small, idyllic city within Miami-Dade County. Also known as Little Managua, Sweetwater is regarded as the city known for its high concentration of Nicaraguans and Nicaraguan-Americans.

Be sure to sign up for a free account so that you can receive email alerts whenever a new Sweetwater home is listed in the Miami MLS.

Located to the northeast of Fontainebleau, Sweetwater is bounded by University Park to the south and southeast and by Tamiami to the southwest, west, and northwest.

With a rich history dating from the 1920s land boom, Sweetwater was originally purchased by the Miami-Pittsburgh Land Company, which platted the land as Sweetwater Groves. Further development, however, was greatly affected by the 1926 Miami Hurricane and the subsequent collapse of the South Florida real estate.

In an attempt to rebuild the area, Sweetwater was acquired by Clyde Andrews who sold the land to mostly retiree dwarves. The community was then known as a midget neighborhood.

Sweetwater was incorporated in 1941 under the governance of Joe Sanderlin. After a decade, the neighborhood had more than 500 residents. While the community did not grow much in population, it has been self-sustaining with its own town hall, grocery stores, police force, volunteer fire department and a service station.

The neighborhood of Sweetwater may be small but it is wealthy in local amenities that residents can enjoy. It has several parks like Ronselli Park, Linear Park, Carlow Park and Dominoes Park. Ronselli Park is home to the Jorge Mas Canosa Youth Center, which also offers various programs for the residents.

It is home to the Flagler Shopping Center and Dolphin Mall while International Mall is within short distance from the neighborhood.