Homes for Sale in Miami 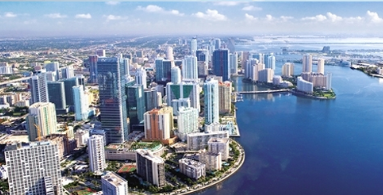 Search all Miami homes for sale below. ﻿Browse the most comprehensive source of Miami real estate listings because our data is sourced from Miami's largest MLS and updated every 15 minutes.

Be sure to sign up for a free account so that you can receive email alerts whenever a new Miami home (that matches your criteria) is listed in the MLS.

Located on the Atlantic Ocean, Miami is a South Florida seaport city that is United States’ fourth largest urban area with a population of about 5.5 million.

Miami is between the Biscayne Bay to the east and the Florida Everglades to the west. A large area of the city lies directly on the shores of Biscayne Bay, which is home to barrier islands including South Beach and Miami Beach.

Historically, the city of Miami was first inhabited by the Tequestas. The Indian village with a population of about a hundred individuals was at the mouth of the Miami River.

Around the 1560s, the area was claimed by the Spanish and European who controlled Florida until it was ceded to the United States by 1821. By 1836, the United State built Fort Dallas to combat the Seminoles and this has led to Miami becoming the site of the Second Seminole War.

During its early years of growth and development, Miami was more famous as the “Biscayne Bay Country,” conceived by Julia Tuttle. Miami continued to prosper during the 1920s with its growth in the number of residents and infrastructures.

Today, it serves as one of the main centers of commerce, finance, arts and culture, media and entertainment and international trade. The city has made its name by receiving several recognition in the past.

Miami received an Alpha-World City classification from the World Cities Study Group Inventory in 2012. It was also dubbed by Forbes magazine as “America’s Cleanest City” in 2008 for its good air quality and wealth of lush greenery and open spaces, potable drinking water, clean streets and city-wide recycling initiatives. In the 2009 study conducted by UBS, Miami was the richest city in the United States and the world’s fifth richest through its purchasing power.

Most of United States’ international banks and large national and international companies have their offices in Downtown Miami, while the Civic Center is home to many research institutes, hospitals, medical centers and biotechnology industries.

Miami’s public transportation system is under the management of Miami-Dade Transit and SFRTA. It includes the elevated Metromover, commuter rail Tri-Rail, the heavy-rail rapid transit Metrorail and Metrobus.  Metrorail connects the inner-city Miami, Hialeah and Medley with the suburbs of Coconut Grove, The Roads, Coral Gables, South Miami and the urban Kendall through the business hubs of Civic Center, Miami International Airport and Downtown.

Metromover has 21 stations on three different lines located at Brickell, Downtown and the greater Downtown Miami. Tri-Rail runs from the Miami International Airport going north to cover West Palm Beach, with stops throughout the counties of Broward, Miami-Dade, and Palm Beach.

Residents of Miami homes often use the public transportation when going around the city.

Miami is home to many different sections, divided into Downtown, South, North and West. Downtown Miami lies on the eastern side of the city with the neighborhoods of Brickell, Virginia Key, Watson Island and Port of Miami.

Located at the east of Downtown is the South Beach area and to its northwest is the Civic Center.  On the south side of Miami are the neighborhoods of The Roads, Coral Way and Coconut Grove. Coral Way is among the historic neighborhoods in the city and is home to many old homes.  Coconut Grove, on the other hand, hosts a number of restaurants, bohemian shops, nightclubs and bars that is a favorite among college students. Coconut Grove is also home to many popular parks and gardens like Villa Vizcaya, The Barnacle Historic State Park and The Kampong.

Miami’s west side has the communities of West Flagler, Flagami and Little Havana. The neighborhoods are home to many Central America and Cuban immigrants. Allapattah, on the west central area of the city, is a community of individuals from many different ethnicities.

On the northern area of Miami is the Midtown neighborhood defined by the Edgewater and Wynwood neighborhoods – one of the edgiest and artistic communities of Miami. The Design District and Upper Eastside, with many affluent residents, contains majority of the Miami Modern historic homes. Overtown, Little Haiti and Liberty City are also within the northern area of Miami and are home to Caribbean and African American immigrants.

Port of Miami, also named as the “Cruise Capital of the World,” remains the top port of cruise passengers in the world as it has the biggest cruise ships and operations. The city’s primary international airport is the Miami International Airport, which accommodates about 35 million passengers annually. Fort-Lauderdale-Hollywood International Airport caters other Miami commercial flights, while Opa-Locka Airport and Kendall-Tamiami Airport serve private aircrafts and some general aviation traffic of Miami.

Miami homes for sale remain one of the most expensive in the United States as it is home to a number of beautiful neighborhoods in South Florida. Home buyers continue to flock the city for the number of activities and amenities that they can enjoy like sailing, boating, golfing, beach life, luxury shopping and dining, night life and hiking and biking at the natural parks.

Condos on the beach, luxurious homes by the bay and elegant homes in an idyllic neighborhood are all offered in Miami, making it an ideal place to raise a family, do business and just have fun.

The areas of Brickell Avenue, Miami Beach and Sunny Isles Beach have one of the highest concentrations of high-rise condominium buildings in the city including The Mansions at Acqualina, Muse Residences, Portofino Tower, Continuum and W South Beach.

Single family Miami homes for sale are one of the most luxurious, catering to A-listers and celebrities. Neighborhoods like Aventura, Bal Harbour, Coconut Grove and Indian Creek are home to many large estates and historic mansions that truly make South Florida living a breeze.