Homes for Sale in Miami Beach 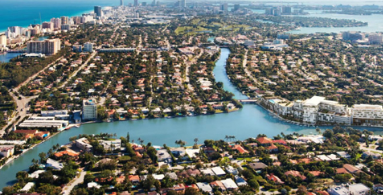 Search all Miami Beach homes for sale below. ﻿Miami Beach is a well-known city within Miami-Dade County that boasts of pristine beaches and luxurious real estate, making it among the top tourist destinations in the United States. Miami Beach is a barrier island that features a collection of natural and artificial islands sandwiched by the Atlantic Ocean and the Biscayne Bay.

Be sure to sign up for a free account so that you can receive email alerts whenever a new Miami Beach home (that matches your criteria) is listed in the MLS.

The continuous development of luxurious residential enclaves that promise exclusivity and privacy appeal to businessmen, celebrities, socialites and prominent personalities.

On the southern tip of the Miami Beach is the famous South Beach or SoBe, covering about 2.5 square miles. Together with Downtown and Port of Miami, South Beach forms the commercial hub of South Florida.

Miami Beach is a place rich in history. In 1979, its Art Deco Historic District was in the National Register of Historic Places list for its high volume of Art Deco architecture. It also has a large concentration of apartments, hotels and buildings built between 1923 and 1943.

Miami Beach is under the governance of a ceremonial mayor and six commissioners with equal voting power. The city has a manager that is responsible in overseeing governmental operations. The city also has appointed City Attorney and City Clerk.

The father-and-son duo of Henry and Charles Lum was responsible for building the first structure in the uninhabited oceanfront neighborhood in 1870. The Biscayne House of Refuge served as a place that provides food, shelter and a return to civilization means for shipwrecked individuals. By the 1880s, agriculturist John Collins saw the neighborhood’s potential in becoming a resort. Through the great minds of Carl Fisher, the Lummus Brothers and the Collins family, Miami Beach was born as a commercial hub.

The first hotel built in the neighborhood, in 1915, was Brown’s Hotel at 112 Ocean Drive. It was also during this time that the Lummus Brothers, the Collins and Fisher were living inside the mansions that they have built in the island. By this time, Miami Beach already has three hotels, two bath houses, aquarium and an 18-hole golf course. Miami Beach received its incorporation to become a city by 1917, as many tourists visit the neighborhood and its many offerings.

New World Symphony Orchestra and Lincoln Road in the South Beach neighborhood are popular among locals and tourists. Lincoln Road Mall has many spots for bicycling, outdoor dining and shopping.

Despite not having a Metrorail station, going around Miami Beach is easy as Miami-Dade Transit oversees public commute. Commuters can take a Metrobus ride, which will connect them to the Downtown Miami where they can take the Metrorail. The South Beach Local connects South Beach to other bus lines in the nearby communities.

Miami Beach has a wealth of restaurants, night clubs, shopping and other entertainment centers. Some of the places of interest in the neighborhood are the Eden Roc, Versace Mansion, Holocaust Memorial, Flagler Monument Island, Fillmore Miami Beach at the Jackie Gleason Theatre, Miami Beach Architectural District and Miami Beach Botanical Garden.

The Florida International University School of Architecture has a sister campus located at 420 Lincoln Road.

South Beach from South Pointe Drive to the 23rd Street is Miami Beach’s most popular area – thanks to the wide audience of the now-defunct “Miami Vice.” South Beach has come a long way since its Miami Vice debut. Today, the neighborhood is among the richest commercial districts of Miami.

If there is one place in Miami that epitomizes the term “exciting beach community”, then South Beach is it. This is the place people go to when they want to go from lazing around on the sand to clubbing the night away in one go. This is also one of the more interesting places in Miami due to the diversity of the people here plus the numerous places of interest one can explore.

Of course, homes in South Beach are not really what you might call cheap, but there are a few reasonably priced apartment complexes and condominium buildings here suited to the millennial budget.

While considered a rather high-end enclave, Bal Harbour is one community that millennials actually love going to, and when given the chance, to stay in. One of the popular attractions here is the Bal Harbour Shops, which houses numerous designer label shops such as Gucci, Versace, and many more. The area also has a number of bars, gourmet restaurants, and hangouts that appeal to the younger set.

Also notable in this part of Miami is the dedication a lot of residents have to fitness. You can see youngsters paddle-boarding, biking, doing yoga, and other fitness regimens in and along the beach here.

Located south of South Beach, or more accurately, South of Fifth Avenue in South Beach, this area is one of the up-and-coming addresses in Miami. While considered a luxury neighborhood, there are actually rental units here that fit the thrifty millennial’s budget. Home-sharing among friends is actually a great way to live in style here while still staying within budget.

This is a great place for those who want to be close enough to the hip and happening nightspots of South Beach, but far enough to enjoy peace and tranquility when they need it.