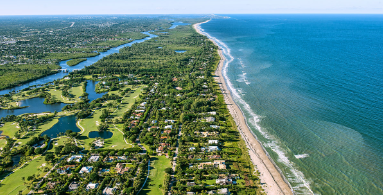 Homes for Sale in Jupiter Island

Search all Jupiter Island homes for sale below. Jupiter Island is a town that is located in Martin County. It is situated on a barrier island and is part of the Port St. Lucie Statistical Area.

Be sure to sign up for a free account so that you can receive email alerts whenever a new home (that matches your criteria) is listed in the Jupiter Island MLS.

Jupiter Island was incorporated in 1953. It adapts a manager-council form of governance with a Town Manager taking care of all the affairs of the community.

Seminole Indians and Ais were the first inhabitants of the area during the 1800s. Known as the Gomez Grant, the King and Queen of Spain awarded Don Eusebio Gomez a vast area of land that surrounds the Indian River and the Loxahatchee River. The area’s name was originally known as the Jobe, which was later on Anglicized to Hobe Sound. Jupiter Island was then named as Jupiter as a Spanish translation of the term Jobe.

By 1821, Gomez sold 8,000 acres of his land to several individuals, while the remaining 4,000 acres remained under his ownership.

For a couple of years, several property developers fought for the land ownership all in the hopes of developing the area.

To date, Jupiter Island remains a peaceful and quiet neighborhood home to only a few permanent residents. Many of the properties in the town are second-homes of its owners and are only used as a vacation destination.

For some lush greenery and nature activities, the town is home to Blowing Rocks Preserve, Harbor Island and Coral Cove Park.

It is also a few minutes away from the Jupiter Pointe Marina located in the neighborhood of Jupiter.

Jupiter Island is known for having a number of expansive mansions and estates built on oversized lots. Most of them have a waterfront location and have their own boat docks, giving residents direct access to the waters of the Atlantic Ocean.