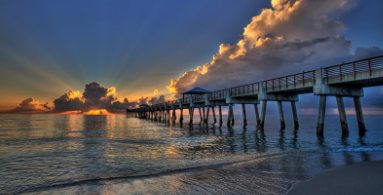 Homes for Sale in Juno Beach

Search all Juno Beach homes for sale below.  Juno Beach is largely a residential community home to many elegant waterfront estates and condominiums that are ideal both as a vacation home or permanent residence.

Be sure to sign up for a free account so that you can receive email alerts whenever a new home (that matches your criteria) is listed in the Juno Beach MLS.

Juno Beach is a community along southeast Florida’s Atlantic shore that used to serve as a settlement area for tourist court and motel owners. Composed of 130 permanent residents and 1,500 seasonal visitors, the town was incorporated in 1953.

It is a barrier island that was a result of the dredging of the Intracoastal Waterway from Lake Worth Creek to Lake Worth. The first subdivision, along the Seminole Golf Course, was platted in 1948. The developers dredged a pond for them to build the 500-foot fishing pier located at the edge of Mercury Way. This development gave prompted the town to plan its development.

Juno Beach was named after the ancient Roman goddess who is a protector of nations and especially women. The women of the Juno Beach Garden Club was responsible in naming the town’s streets, most of which are derived from names of gods and goddesses.

The residential community started to boom in the late 1960s to the 1980s and has resulted to different residential options and healthy tax base for the community.

Similar to most of the livable communities of Miami,  the town has a 16-member Police Department that maintains safety and order. Fire protection and paramedic needs of the Juno Beach community are provided by the Palm Beach County Fire Rescue.

The beachside community of Juno Beach offers its residents and tourists a host of activities. The Jupiter Theatre, Juno Dunes Natural Area and Loggerhead Park and Loggerhead Marine Life Center are a favorite among locals.

The town also has a number of golf courses, county parks, art galleries and shopping centers that residents can explore.