Homes for Sale in Hibiscus Island 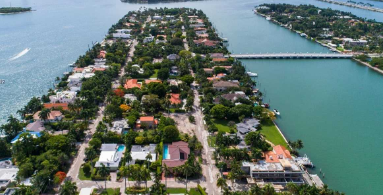 Search all Hibiscus Island homes for sale below. ﻿Hibiscus Island is among the man-made group of islands in Biscayne Bay located south of Palm Island and west of Star Island. The exclusive residential neighborhood of Hibiscus Island is dotted with mansions and some of the finest homes in the Miami area. Access to the island is via the MacArthur Causeway, which also serves as the parking of private ferries of Fisher Island residents.

Don't miss out on your dream home in Hibiscus Island! Be sure to sign up for a free account so that you can receive email alerts whenever a new home (that matches your criteria) is listed in the Miami Beach MLS.

Hibiscus Island is a community within the neighborhood of South Beach bounded by the communities of Palm Island and Star Island.

In 1922, the Army Corps of Engineers started reclamation on the area to create an island. Since then, Hibiscus Island became the winter homes of notable personalities, particularly Al Capone who enjoyed the stunning views of the Miami Beach and Downtown Miami skyline.

The roads of Hibiscus are open to public but its entryways have guards who patrol the area 24/7, keeping the neighborhood private and secured.

Homes for sale in Hibiscus Island are mostly massive mansions with well-maintained lawns and lush greenery on spacious lots. Many of the homes with large acreage also have their own luxurious pools, boat docks and private areas.

Hibiscus Island is quiet and private, with most residents preferring to cruise on their boats or ride their jet skis while enjoying the beautiful views of the Biscayne Bay. The ovular shape of the island gives many of the properties waterfront views of the ocean.

The neighborhood shares its Hibiscus Island Park with Palm Island residents. The community center has racquetball and basketball courts, lighted tennis courts and a playground.