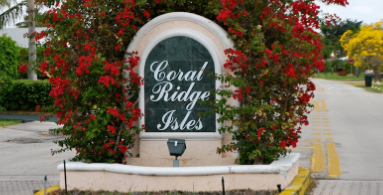 Search all Coral Ridge Isles homes for sale below. ﻿Coral Ridge Isles is a small community that sits near the border of Fort Lauderdale and Pompano Beach, located east of Knoll Ridge and south of Boulevard Park Isles.

Be sure to sign up for a free account so that you can receive email alerts whenever a new Coral Ridge Isles home is listed in the Fort Lauderdale MLS.

Coral Ridge Isles is a small community that sits near the border of Fort Lauderdale and Pompano Beach, located east of Knoll Ridge and south of Boulevard Park Isles. It is also located northwest of the Coral Ridge Country Club and northeast of the Central Business District. While technically not made out of “islands” as the name implies, the name may be because of the island effect that the canals give these properties.

Coral Ridge Isles, while somewhat smaller than the other communities nearby, does not lack for great entertainment options, retail outlets, and specialty shops for residents to frequent. The area is also dotted with great restaurants for people in the community to enjoy. Here is a list of some of the best ones that get the thumbs up from those who have tried them:

Coral Ridge Isles is an enclave that sits in the northern part of Fort Lauderdale, and is located just a few miles west of the marvelous beaches of the city. The surrounding neighborhoods here include Imperial Point to the northeast, Boulevard Park Isles to the north, Knoll Ridge to the southeast, and the Central Business District to the southwest. Also nearby is the popular Coral Ridge Country Club, which has an 18-hole championship course and numerous tennis courts.

A majority of the homes in the northern part of the enclave are occupied by their homeowners, but the lower half of the community has more renters than homeowners living in their homes. This may be because there are more multi-unit homes in the lower half of the neighborhood, and the upper half consists more of single-family homes, with only 36% of the residences here belonging to multi-unit structures and complexes.

The homes here are mostly single family homes, but there are quite a few multi-unit residences within this enclave. Most of these apartment and condo buildings can be found at the end of roads and along the borders of the community, with some being considered high rise developments and a few others being old-fashioned apartment buildings that do not go higher than 5 floors. Here is a list of some of these residential options within this community:

Search all homes for sale in Fort Lauderdale