Condos for Sale in Edgewater 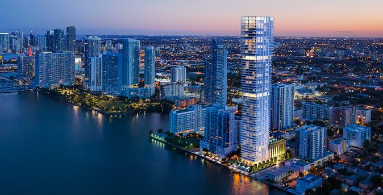 Search all Edgewater real estate listings below. Edgewater is an established neighborhood in Miami located north of Downtown Miami and Omni and south of Upper Eastside. Edgewater remains a sought-after area due to its luxury high-rise condos and proximity to Miami's financial hub.

Don't miss out on your dream home Edgewater condo! Be sure to sign up for a free account so that you can receive email alerts whenever a new home (that matches your criteria) is listed in the MLS.

Edgewater is nearby the successful and affluent neighborhoods of Buena Vista, Upper Eastside, Overtown, and Midtown/Wynwood.

Being in the center of the business-rich Downtown Miami and the artistic districts of Wynwood and Design District, the community of Edgewater developed its sense of culture and commerce while maintaining its sea and relaxation vibe.

This Edgewater character helped put the neighborhood on the map. Edgewater Miami benefited largely from the growth of Downtown Miami and Design District that by 2000, the neighborhood has a wealth of new housing constructions and retail shops.

Its nearness to Wynwood and Design District allows Edgewater Miami residents to have easy access to many of the art galleries such as Wynwood Walls, Cafeina Wynwood Lounge, The Art Miami Pavilion, Miami Art Wall and Bakehouse Art Complex.

Residents of Edgewater Miami head to shops at the nearby Midtown Mall for most of their necessities. But they also visit trendy and edgy boutiques in Miami Design District and Wynwood Block. Bal Harbour Shops is about 30 minutes away from the neighborhood. Walgreens is also near the neighborhood.

Exercise bars, lush greenery, clean sidewalks are some of the pleasures that Edgewater residents enjoy. Margaret Pace Park is a gem that most Miami folks love to visit. Other parks nearby include Dorsey Park, Museum Park, Martell Park, and Stearns Park.

Edgewater condos captivate the skyline of one of Miami’s trendiest and up-and-coming neighborhoods. With the Biscayne Bay bordering the condos to the east, many of the residential units have breathtaking views of the bay and the city.

Many of the units offered feature spacious interior living spaces coupled with oversized and private balconies and terraces. The homes have modern and elegant finishes that allow comfortable and luxurious living.

The neighborhood benefited largely from the growth of Downtown Miami and Design District that by 2000, Edgewater has a wealth of new housing constructions and retail shops.

While Edgewater Miami is home to many historic 20th century homes, the neighborhood has seen redevelopments such as the construction of mid-rise and high-rise residential buildings that have pushed urbanization in the area.

Homes for sale in Edgewater Miami vary from bungalow to multi-story complexes that beautifully complement the old historic houses.

It is 15 minutes away from Miami International Airport. South Beach and American Airlines Arena are only a short 10 minutes away. Miami Metrorail and Metrobus serve the residents of Edgewater Miami.