Homes for Sale in Park West 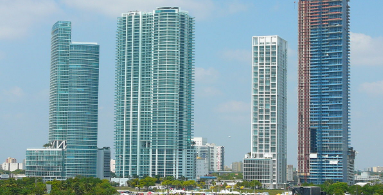 Search all Park West condos for sale below. Park West is a neighborhood of Downtown Miami located just west of Museum Park. Known for its nightlife scene, Park West is rapidly becoming a favorite for young professionals and college students. Living in Park West means being close to many urban parks that feature lush greenery, modern amenities, and perfect views of the bay.

Don't miss out on your dream condo in the Park West! Be sure to sign up for a free account so that you can receive email alerts whenever a new home (that matches your criteria) is listed in the Miami MLS.

Park West's name is due to its proximity to Museum Park. In terms of geographic borders, Park West has  I-395 to its north, Biscayne Boulevard to its east, NE 7th Street to its south, and NE 1st Avenue to its west as its borders.

It is near the residential community of Lummus Park, the historic neighborhood of Overtown, the artistic districts of Wynwood and Design District, the financial hubs of Brickell, and the stunning beaches of Miami Beach.

A large part, about 30 acres of the west side of the neighborhood is under development to become Miami Worldcenter. The new urban center will feature numerous retail stores and residential offerings that will spark the burgeoning of Park West’s community even more.

Miami-Dade Transit serves the residents of Park West via Metrobus that has routes along major thoroughfares.

The community of Park West is just 12 minutes from American Airlines Arena and about 17 minutes from Miami International Airport.

Its location within the flourishing city of Downtown Miami gives Park West residents convenient access to most of the best offerings of Miami.

Like Downtown Miami, most of the homes for sale in Park West are high-rise condominiums that treat its residents with stunning views of the Miami skyline and the perfect panoramas of the bay. Home prices, according to analysts will continue to increase given the number of developments currently planned in and near the neighborhood.

Park West benefits from the thriving businesses of Downtown Miami, attracting wealthy businessmen. The neighborhood is home to a number of luxurious condo developments that offer the best amenities. This includes: