Homes for Sale in Jewelry District 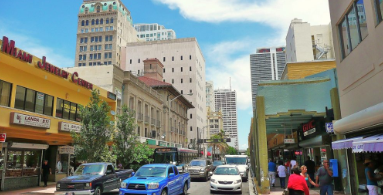 Don't miss out on your dream condo in the Jewelry District! Be sure to sign up for a free account so that you can receive email alerts whenever a new home (that matches your criteria) is listed in the Miami MLS.

Another sub-neighborhood of the Central Business District of Miami is the Jewelry District, which is where jewelers, jewelry stores, and gem dealers hold office. The area that is covered by this name is a mere 4 city blocks. From NE 2nd Street to NE 2nd Avenue, then down to E Flager Street, to N Miami Avenue. This is the third place in the United States that carries this designation, with the other two being in Los Angeles California, and Providence Rhode Island.

People who live in this area of the Miami-CBD are generally between the ages of 31 and 42. As with other parts of the CBD, homeownership here is below 20%, with people renting apartments and condominium units rather than buying homes. Despite the fact that people do not own homes here, they still love the place for its colorful and diverse history. They also enjoy the fact that this is where people go to buy jewelry.

Those who end up purchasing homes here either have businesses nearby or are investors who lease their properties to others. Most of the buildings here were built between 1995 and 2001, with the exception of those that are on the list of historic buildings in Miami which have been around since the 1920s.

After you’ve had your share of jewelry shopping and strolling along historic streets here, you can try out some of the restaurants that can be found within and around this district:

You'll mostly find condominium units, lofts, and multi-family residential buildings in the Jewelry District. There are very few detached homes to be found in this sub-neighborhood.

The Jewelry District of Miami is a rather small sub-neighborhood which is just 4 square blocks. This very busy area of the city has loft buildings, condominium buildings, and apartment complexes for people to live in.

Most of the buildings here, apart from the historic ones, were built between 1995 and 2005, making these somewhat new. Residents here are mostly in their thirties, with a few 20-somethings and children below 18 thrown into the mix. The neighborhood is not that densely populated due to the fact that most of the structures here are used for business and not for residential purposes.

A unique aspect of the Jewelry District is that jewelry sellers employ security personnel for their businesses, which leads to a lower crime rate than surrounding areas.

Search all condos for sale in Downtown Miami