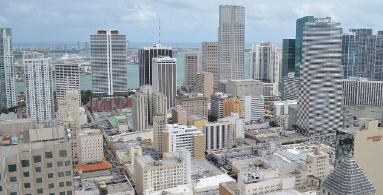 Don't miss out on your dream condo in the Central Business District! Be sure to sign up for a free account so that you can receive email alerts whenever a new home (that matches your criteria) is listed in the Miami MLS.

The Central Business District or CBD of Miami is an area that stretches from Biscayne Boulevard to the east, down to the Miami River, then west to I-95, then up north to N 6th Street, which is basically the middle of Miami’s Downtown area.

The general age of most of the people in this area is between 30 and 41, which means it is a mixture of Gen X-ers and Millenials. This means that majority of those in this area are either in the middle of their careers or nearing its peak.

Only 12 percent of those who live in the CBD are homeowners, with a majority renting due to the fact that a lot of these people are from elsewhere and trooped to Miami for work.

Those who do end up staying and eventually purchasing a property in the area do so not only for their careers but also for other things. Miami is, after all, a walking city that has a wealth of culture, a treasure trove of varying cuisines, and steeped in history.

Aside from these reasons, people who find themselves settling for good in the CBD of Miami do so because of friends, family, the majestic views of the bay, the amazing food, and the many interesting events that happen in the city on any given week.

Miami CBD is always abuzz with activity, what with it being one of the busiest areas in the city. Aside from work, people in the area enjoy the many attractions that can be found here, like the many watersports that you can try, exploring the many parks in the vicinity, and marveling at the artworks in the many galleries here.

Aside from these leisurely pursuits, people also enjoy the rather eclectic selection of food outlets in the district. Here are the ten most popular ones in the area:

The Central Business District of Downtown Miami is a busy hub where people live in homes that are not that difficult to maintain. While most of the residences here consist of lofts, apartments, and low rise residential buildings, there has been a spate of high-rise construction in the area, adding luxury condominiums to the list of home options here

A lot of the homes in the Miami CBD were built in the new millennium, with a few having been built in the mid to late 1990s. The majority of the populace here are in their 30s, with a few kids under 18 living with their parents, mostly in the lower part of this area near the river.

As with any densely populated progressive locales, the Central Business District of Miami is not what you might call crime-free. Some areas are safer than others here, which may be why some flock to the lower parts as well as the edges of the Miami CBD.

Search all condos for sale in Downtown Miami