Condos for Sale in Downtown Miami 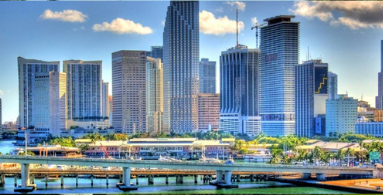 Search all Downtown Miami real estate listings below. Downtown Miami is an urban neighborhood touted as the financial, cultural, and commercial center of South Florida. Tracing its history from the 19th century, Downtown shows no signs of stopping as businesses continue to attract foreign investors looking to improve their real estate portfolio.

Don't miss out on your dream home Downtown Miami condo! Be sure to sign up for a free account so that you can receive email alerts whenever a new home (that matches your criteria) is listed in the MLS.

Downtown Miami or Downtown is an urban, residential neighborhood defined as the 3.8 square mile area at the east of Interstate 95 between Julia Tuttle Causeway to the north and Rickenbacker Causeway to the south.

The neighborhood has Biscayne Bay to the east, NE 6th St to the north, and the Miami River to its south and west. Downtown, together with Coconut Grove, is the historic center of Miami, with urban developments that dates to the early 1900s.

Residents can take the Miami Metrorail over at the Government Center, Historic Overtown/Lyric Theatre, and Brickell stations, which may be accessed through the Tri-Rail transfer station. The Metrorail also connects to the Metromover that covers 22 stations on the Inner Loop and Brickell and Omni branch loops.

Miami International Airport takes a travel time of 16 minutes via the Airport Express W, while American Airlines Arena is a mere 15-minute walk from the neighborhood.

Miami Beach and its many activities are about 5 miles from Downtown and are accessible via the MacArthur Causeway.

Flagler Street is a famous go-to place by locals, particularly for those looking for jewelry. Other shopping destinations include Mary Brickell Village in nearby Brickell and Bayside Marketplace that overlooks the Bayfront Park and Biscayne Bay.

Downtown condos for sale are mostly overlooking the lush greeneries of the beautiful Bayfront Park and feature panoramic views of the Atlantic Ocean and Biscayne Bay. Downtown condos are surrounded by large and popular parks including Museum Park, Bayfront Park, and Pace Park. Bayfront Park serves as a host to numerous outdoor concerts and annual events.