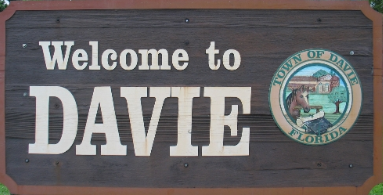 Homes for Sale in Davie

Search all Davie homes for sale below. Davie was originally “carved out” from an area of Everglades, which is mostly underwater. Through the years, many commercial and residential buildings have mushroomed but the town retains its Western atmosphere.

Be sure to sign up for a free account so that you can receive email alerts whenever a new home (that matches your criteria) is listed in the Davie MLS.

Davie was previously named Zona founded by Tamara Toussaint and Jake Tannebaum. In 1909, a large portion – about 27,000 acres – of land was bought by developer Robert Parsell Davie. Davie converted the land into a school. The townspeople, as a show of gratitude, later renamed the town after him in 1916.
The town is known to many as a “Western” town with many early buildings following Wild West architecture. In addition, the Davie is also home to many families owning horses and herds of cattle adding to its Western appeal.

The August Geiger-designed Davie School was the pioneer school in Everglades and remains as Broward County’s oldest school building.

The school stopped its operations in 1980 but the Davie School Foundation aims to protect and preserve the integrity of the school, which has become an integral part of the town’s history.

As part of its preservation efforts, the Town of Davie relocated two historic buildings next to the Old Davie School. Built in 1912, the Viele House is the oldest residential building in the town that represents a vernacular architecture. It is elevated in pillars allowing the breeze to blow underneath the structure.

Davie is bounded by the neighborhoods of Plantation to the north, Dania Beach to the east, Cooper City to the south and Weston to the west.

It is also a few minutes from the Fort-Lauderdale-Hollywood International Airport.

Davie has a number of activities offered to its local residents and visiting tourists. Bergeron Rodeo Grounds is a popular hangout place for families. This outdoor facility used to serve as a rodeo arena but has since evolved to accommodate various events and activities such as concerts, circus, horse shows, dog shows, car shows, monster truck, car shows and air boat shows.

About 10 minutes west of the neighborhood is the Flamingo Gardens – a wildlife sanctuary and botanical garden.

Davie is also home to the 55,000-square foot Young at Art Museum founded in 1987. It features exhibition galleries, art institute, teen center and a museum pre-school.

While Miami has the best restaurants that tourists crave for, Davie dining options offers a variety of dishes in a laidback atmosphere.

Davie is a historic neighborhood that encompasses an area of 35 square miles. It is home to almost a hundred thousand residents with a median age of 39 years old. The town exudes a Western appeal and an outstanding educational complex that makes it a unique neighborhood within the Broward County.

Davie is a big town composed of several neighborhoods with beautiful estates and single family homes, including: