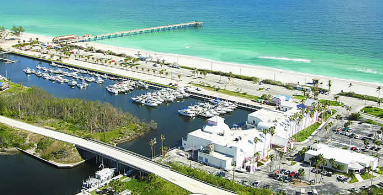 Homes for Sale in Dania Beach

Search all Dania Beach homes for sale below. Dania Beach is a tranquil neighborhood home to many beautiful single-family homes, townhome complexes, and waterfront condominiums.

Be sure to sign up for a free account so that you can receive email alerts whenever a new home (that matches your criteria) is listed in the MLS.

Dania Beach is a Broward County city, which belongs to the South Florida metropolitan area. Over the years, the neighborhood has continued to attract home buyers due to the flourishing real estate market.

Dania Beach started as an area named Modello during the latter part of the 19th century. The city was then incorporated in November of 1904 as a town of Dania since majority of its residents has Danish ancestry.

By 1926, the locals voted to annex itself to Hollywood but due to the damage caused by the 1926 Miami Hurricane, the neighborhood was reincorporated as a city. It was only in November 1998 that the city formally changed its name to Dania Beach.

Dania Beach brands itself as the first city of Broward County. The neighborhood used to be known as the “Tomato Capital of the World,” but due to the shift from farming to urban living home to many antique shops, the city is now referred to as the “Antique Capital of the South.” Downtown Dania Beach, along the Federal Highway or “Antique’s Row,” is where most of these shops are.

The city is centrally located to South Florida’s most sought after neighborhoods and landmarks. It is bounded to the north by Fort Lauderdale, to the south by Hollywood, to the east by both the Atlantic Ocean and Hollywood and to the west by Davie along with the Hollywood Seminole Indian Reservation.

The Fort Lauderdale-Hollywood International Airport is just a few minutes northeast of the neighborhood.

The neighborhood is currently working on their Dania Beach Oasis Project aimed at improving the quality of life of its locals and tourists. Through the project, the city hopes to foster a strong sense of community, camaraderie and neighborhood stability among its residents that would eventually reduce crime and alleviate blight.

At present, the City of Dania Beach has succeeded in several clean ups and water pipe replacements. The project is currently working on the initial phase of the Ocean Park Beach Beautification, Ravenswood Road Bridge Replacement and Dania Pointe – a mixed use development project.

Dania Beach is a great community for families as it is family friendly and offers its locals an extensive collection of well-maintained park system. The park system is made up of 16 parks, nine playgrounds, seven basketball courts, six baseball diamonds, four tennis courts, three recreation centers and sports complexes, two community pools, two community centers and one football field.

About a 10-minute drive to the lovable neighborhood of Aventura, Dania Beach is also home to the Dania Beach Marina located at 151 North Beach Road, just across the Dania Beach Ocean Park and Dania Beach Pier. The marina is south of the Port Everglades inlet and is only a few minutes from the Fort Lauderdale International Airport.

The city is also the home of The Casino at Dania Beach that houses the biggest jai alai frontons in the country.

Home buyers can choose from the following subdivisions and residential condo projects: