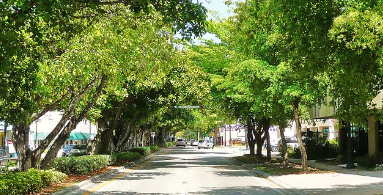 Homes for Sale in Coral Way

Search all Coral Way homes for sale below. Coral Way is a neighborhood in Miami demarcated by the Coral Way road established by George Merrick. The early 20th-century architecture blending with its urban boulevard makes Coral Way homes a favorite among home buyers.

Be sure to sign up for a free account so that you can receive email alerts whenever a new Coral Way home is listed in the MLS.

The neighborhood came about in 1922 when its citrus lined streets developed to include streetcar tracks at the middle of the road, which connected the communities of Downtown Miami to Coral Gables. By 1929, the community started a Roadside Beautification Program and planted 1,200 Banyan trees along the boulevard. The beautiful Coral Way Boulevard transects Miami between Brickell Avenue and SW 37th Avenue.

Coral Gate is at the north of Coral Way, east of SW 37th Avenue, south of SW 16th Street, west of SW 32nd Avenue. It serves as the border of Golden Pines to the south and Coral Gables to the west. Coral Gate’s east and north borders have walls and street barriers that prohibit passage of vehicles.

The sub-neighborhood of Golden Pines is at the east of Coral Gables bounded by SW 22nd Street to the north, 27th Avenue to the east, South Dixie Highway to the south, and 37th Avenue to the west.

Silver Bluff sub-neighborhood is along the south of Coral Way road, east of SW 27th Avenue, west of SW 17th Avenue and north of South Dixie Highway. A larger part of the community, City of Silver Bluff, belongs to the City of Miami in 1926.

Shenandoah is the most important and famous of the sub-neighborhoods, as it is where many of the Mission Revival Style homes from the 1920s to 1930s are. The historic community’s borders include SW 9th Street to the north, SW 27th Avenue to the west, Coral Way to the south and SW 12th Avenue to the east. It is directly south of Little Havana.

Residents of Coral Way commute via the Metrobus and Miami Metrorail at the following stations: Coconut Grove (US 1 and West 27th Avenue/SR 9), Vizcaya (US 1 and West First Avenue/South Dixie Highway) and Douglas Road (SW 37th Avenue/US 1).

Coral Way residents need only to drive 15 minutes to reach Miami International Airport. South Beach and American Airlines Arena are only less than 20 minutes away, while Bal Harbour Shops is only a 32-minute trip by car.

Coral Way is more than just a boulevard. Here residents also go for a shop at Miracle Marketplace that hosts a large collection of chain retailers, casual dining, and free parking. Among its tenants are Nordstrom Rack, Marshalls, DSW Shoe Warehouse, Michael’s and Bed Bath & Beyond.

Coral Way spoils its residents with lush greenery and it is evident in the number of parks within and near the neighborhood such as Douglas Park, Coral Gate Park, and Shenandoah Park. Shenandoah Park at SW 21 Avenue is open from sunrise to sunset and features swimming pools, fitness centers, basketball courts and tennis courts. The park also offers programs such as summer and winter camps and tennis lessons.

Coral Way is not only a neighborhood rich in historic dwellings. Food lovers also gush over the meals served at the restaurants lining the boulevard. Some of the must-visit include Miami’s Best Rainy Day Hideaway – Oporto Café, a casual bistro that serves Brazilian and Portuguese meals along with the best wine selections and Old Lisbon Restaurant that cook up seafood meals sure to fill even the hungriest tummies.