Condos for Sale in Brickell 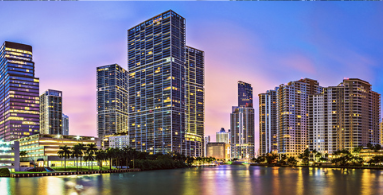 Search all Brickell homes for sale below. Brickell is a rapidly growing urban neighborhood previously touted as the “Millionaire’s Row” due to the large number of lavish mansions constructed in the early 1900s along Brickell Avenue. Forbes Magazine has since dubbed the neighborhood as "Miami’s Wall Street" because of its high concentration of wealthy residents working in the trade and financial sectors.

Don't miss out on your dream condo in Brickell! Be sure to sign up for a free account so that you can receive email alerts whenever a new home (that matches your criteria) is listed in the Miami MLS.

Despite being a neighborhood of Miami, Brickell has its own distinct sub-neighborhoods.

When you talk about “Brickell” and “Homes” in one sentence, it is usually to talk about condos and apartments in the area. What some people may not be aware of is that there are also single-family homes in Brickell however, these rather pricey homes since these are on property that is considered prime.

These homes are found mostly in what is considered luxury neighborhoods and subdivisions, and here are the top 7 areas that fit this description.

Brickell Flagler is an area where you will find numerous large homes that enjoy easy access to both Coconut Grove and Brickell’s Financial District, while still being close enough to the water to have the many resort-like benefits that come with it. Most of the residences that are found on the waterfront in this part of Brickell are in condo buildings, however, a lot of homes that are built in between Brickell Avenue and South Miami Avenue are single-story buildings that are worthy of being called luxury. These homes come with 3 up to 7 bedrooms and can come in the timeless Mediterranean look or in modern glass and stone designs.

The single-family homes in this part of Miami can come with prices that range from a high of $4.9 million to a low of $665,000. This neighborhood is located near the Rickenbacker Causeway and has two parks nearby, namely the Alice Wainwright Park and Simpson Park.

Homes here can come in a variety of configurations with the 2 bedrooms 2 bathroom floor plan being the most common and the bigger single-family homes having somewhere between 5 to 7 bedrooms on an estate that comes with a 9,000 square feet property. Homes here can cost between $1.3 million and $400,000.

Another neighborhood that enjoys the cool waterfront breezes of the bay is the Brickell Hammock area, which is located on the south side of the Rickenbacker Causeway. This small enclave is one of the prime choices for single family homes that are nearest the water and still within the Brickell neighborhood. The area is very near Alice Wainwright Park and is conveniently near a number of main thoroughfares that include the South Dixie Highway, South Miami Avenue, and the causeway.

Homes here come in a variety of configurations as well, with the smaller residences having around 2 to 3 bedrooms, and the more sizable houses having up to 7 bedrooms in them. Prices here range from a low of $485,000 to a high of $1.2 million.

While located within the general sphere of Brickell Hammock, the Villas de Vizcaya is a neighborhood all its own due to the fact that it is a luxury gated community. This small triangular-shaped enclave comes with 13 luxury homes that are housed within a fenced-off area and features such amenities as two-car garages, vaulted ceilings, and European style kitchens. Homes here can come with a pool, although only a select few are actually lucky enough to have such a luxurious feature.

The residences in this small village come in floor plans that range from a minimum of 4 bedrooms to a maximum of 6 bedrooms. Homes here cost upwards of $1 million, with some reaching the $2 million mark.

Located near the border of Coral Way and Brickell is this neighborhood called Brickell Estates. While not a gated community, this enclave houses a number of single-family homes that can be easily called luxurious due to their size and design. While considered a part of the well-known opulent area of Brickell called The Roads, this community is still considered an entity in itself.

Homes here come with floor plans that include smaller 2 bedroom and 2 bathroom configurations to sizable 5 bedroom homes. These homes can cost you somewhere between $499,000 to $2 million, depending on the type of home you are eyeing and the size of the property.

This is a neighborhood located to the west of the financial center of Miami and is a triangular enclave that houses numerous large homes in it. There are also a few condo buildings and apartment complexes within its borders, making it a residential area that is rather diverse and gives prospective residents a varied selection of homes to choose from. Single-family homes here are often very pricey given the location of the neighborhood, which is near both the bustling center of Brickell and the hip & happening Coconut Grove.

Homes here are also varied, with floor plans that range from 2 bedroom homes to very large 6 to 7 bedroom mansion-like residences. Prices are also varied and can go as low as $400,000 to as high as $5 million.

This is a community located on Brickell Avenue and is located near Rickenbacker Causeway. While this community can be easily considered a part of the Brickell Flagler neighborhood, it is a gated enclave that makes it a community on its own. This residential community houses a number of condo units but is more known for its town-house style residences. The townhomes here come with three floors and have configurations that range from 2 bedrooms up to 3 bedroom units for the townhomes.

Prices here are rather reasonable, between $400,000 and $625,000, considering that these are not single-family homes with their own yards and amenities. There are shared amenities however that include a tennis court and a swimming pool.