Condos for Sale in Asia 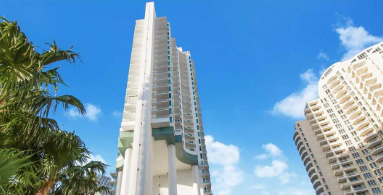 Search all Asia homes for sale below. ﻿Asia is a condominium project developed by Swire Properties and designed by J. Scott Architecture. The building is 33-stories tall and features 123 units with two, three, and four-bedroom floor plans available with square footage starting at 1,600 square feet.

Be sure to sign up for a free account so that you can receive email alerts whenever a new Asia condo is listed in the Miami MLS.

As a resident of the coveted Asia Brickell Key, you are spoiled with the select privilege of never having to leave the comfort of your idyllic tropical island paradise.

Everything you need and more is available right on your front doorstep.

Asia residences are a mix of two, three, and four-bedroom layouts, with each floor only having only three to five units to maximize space. The smaller units have square footage of around 1,600 square feet.

The building has five high speed elevators that bring residents to their private foyers.  Each unit has their own private balconies that offer views of the Downtown Miami and the Biscayne Bay.

Despite being only 33 stories high, Asia tower seem to stand about 40 stories high because each home has 12-foot smooth ceilings. The homes also have painted walls and modern finishes including top-of-the-line appliances.

The ultra-luxurious waterfront building of Asia lies within the Brickell Key area of the business district of Downtown Miami. Brickell is quickly becoming a front-runner in economic stability with many international offices and investment firms setting up their offices in the neighborhood.

Despite being a busy financial district, residents of Asia still have a number of attractions around Brickell that they can visit. The nearby Art Deco District showcases some of Miami’s redesign of modern history. Villa Vizcaya is a public museum that features Italian Renaissance architecture, fine furniture and formal gardens.

For art exhibits and musical performances, Bass Museum of Art and Center for Performing Arts are the most recommended places to visit around Brickell.

Being in the sunshine state, Miami is able to grow tropical plants all year round in the Fairchild Tropical Garden.

The neighborhood is pedestrian-friendly. Residents move about via the Miami Metrorail at the Brickell Station and through 5 stations served by the Metromover’s Brickell Loop.

Residents of Asia only need to travel a few minutes to reach the open air mall of Bal Harbour Shops. Other shopping centers near Asia Brickell Key include Village of Merrick Park, Shopping Insider at Mandarin Oriental and the pedestrian-only mall of Lincoln Road Mall.

Search all condos for sale in Brickell