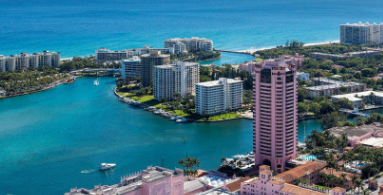 Homes for Sale in Boca Raton

Search all Boca Raton homes for sale below. The City of Boca Raton is among the wealthiest neighborhoods in South Florida and is home to many corporate headquarters such as the ADT, Cancer Treatment Centers of America, and Office Depot.

Be sure to sign up for a free account so that you can receive email alerts whenever a new home (that matches your criteria) is listed in the Boca Raton MLS.

It is situated about 43 miles to the north of Miami and serves as one of the major cities of the Miami Metropolitan Area.

Originally, an area named Boca de Ratones was mapped as an inlet along the Biscayne Bay of Miami during the 18th century. However by the start of the 19th century, the area was mistakenly transferred on its current location as the Boca Ratones Lagoon. The name Boca de Ratones translates to a shallow inlet with sharp-pointed rocks.

The area was first inhabited by the Tequesta tribes who were eventually sent away by the Spanish and British people. The area was developed as a result of the 1920 Florida land boom brought about by the construction of the Florida East Coast Railroad.

The town was envisioned to become a resort town, with Addison Mizner spearheading the construction of many mansions and resort hotels in the community.

Today, Boca Raton is a booming city with a host of commercial establishments and entertainment venues.

Residents can explore the community and nearby cities via the Tri-Rail at Boca Raton Station at Yamato Road. Bus service is provided by the Palm Tran.

Boca Raton has many entertainment avenues that residents can explore.

At the downtown area of Boca Raton is the Mizner Park where many locals and tourists convene during early morning and late afternoons. The upscale shopping center of Town Center Mall is the West Boca Raton has many boutique shops and signature labels that residents often visit.

Properties in Boca Raton follow a Mediterranean Revival or Spanish Colonial Revival architecture style. Many of the homes in the neighborhood have waterfront views. Greater Boca Raton includes neighborhoods in West Boca Raton and Central Boca Raton that are not within the city limits.