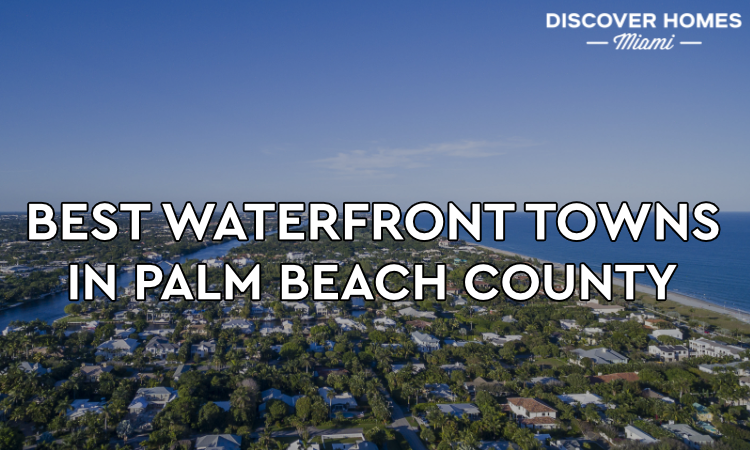 This neighborhood is located at the southern end of Jupiter Island and known for its livability. It is probably the perfect place to live in if you want to live on or near the beach but do not want the crazy crowds that come with such a choice. This town has a very low crime rate, lots of conveniences within and nearby, has a high median household income, and is considered an affluent community, with most of the houses here being huge, mansion-like structures.

This community is one of the many you will find in between two bodies of water in Palm Beach. This neighborhood has the Gulf Stream to the west, separating it from the mainland, and the Atlantic Ocean to the east. What makes this one of the best beach communities in Palm Beach is its low crime rate, the numerous amenities within the neighborhood, and closeness to the water.

This is also considered an affluent community, with numerous luxury condos and large single-family homes dotting the area. Most of the residents here own their homes, with only a small percentage of residents renting.

Another barrier island community in Palm Beach is South Palm Beach, which is just east of Hypoluxo Island. Most of the homes in this part of the county are multi-unit homes and condominium buildings. There are a few townhomes near the northern part of the community, but the majority of the residences here are in high rise buildings.

While you might think that this community is just like most beach communities when it comes to the cost of living, surprisingly enough, it is not that costly to live here.

Probably one of the biggest neighborhoods in Palm Beach County, Jupiter is considered the northernmost town here. It has an area of over 21 square miles and stretches from Riverbend Park to the west up to Carlin Park to the east, which is fronting the Atlantic Ocean. It is just south of Jupiter Inlet Colony and the beach community part of this neighborhood stretches all the way down to Juno Beach.

This community also has a very low crime rate, has numerous amenities, and surprisingly enough, has low median selling prices for homes along the beach.

Browse all Jupiter homes for sale

Located just north of Delray Beach and south of Briny Breezes is this affluent beach community in Palm Beach. This neighborhood is the best choice for those who love both the beach and golf since it has the Gulf Stream Golf Club right in the middle of the community. While crime rates are low here, having a golf course in the middle of the enclave has raised the cost of homes here somewhat.

The community consists mostly of large, single-family homes, with a few condo and apartment buildings within it as well.

This is another beach community in Palm Beach that has a high livability score, and this is due to the many conveniences that can be found within it. Measuring 256 acres, this enclave, which is located northeast of West Palm Beach, has a number of hotels, condos, and resorts lining the Atlantic Ocean side. Single-family homes populate the middle part of this community, and numerous marinas line the western side.

It has a low crime rate, average median household income, and home value, and a somewhat high cost of living.

One of the more popular beach communities in Palm Beach is the Juno Beach enclave, and for many good reasons. It is one of the few beach neighborhoods that has a golf course within its borders, a massive park, and surprisingly enough, reasonably priced homes. This community also has a lake in its midst, numerous conveniences and amenities, and the Seminole Golf Club at its southeastern end.

Crime here is relatively low, homes come with a median selling price of $400K, and the cost of living is pretty reasonable.

This is a relatively small community in Palm Beach, but it is still considered one of the best beach neighborhoods in the county. Homes are not that expensive here, crime rates are 24% lower than the rest of the state, and there are numerous conveniences as well as amenities in and around it. The reason why home costs are pretty low here is that most of the residences in this enclave are mobile homes.

Surprisingly enough, despite the fact that the majority of the residences here are mobile residences, a small percentage of those who live here are renters.

While not technically a beach community, the inclusion of the John D Macarthur Beach State Park lumps this neighborhood in the beach community category. The park is on the easternmost part of the enclave, facing the Atlantic Ocean, and the rest of the community stands on the mainland. The community also has its own golf course, the North Palm Beach Country Club, and the enclave is surrounded by water as well.

Crime in this area is very low, housing costs are reasonable, and the cost of living is also lower than most communities in the area.

Just north of Briny Breezes is the community of Ocean Ridge. This neighborhood, which shares the same stretch of beach with Gulf Stream and Briny Breezes, is the northernmost enclave on this stretch of property, with the Boynton Inlet creating a division between the Manalapan area and this community. This town, which is located east of Boynton Beach, also benefits from the presence of two bodies of water on each side, the Atlantic Ocean to the east and the Gulf Stream waterway to the west.

Most of the homes in this neighborhood are single-family homes, with a few apartment buildings, townhomes, and condo buildings added to the mix.

Homes in this community that is found along with the beach consist of a combination of large estates, condominium buildings, and apartment buildings.

The last, but certainly not the least, of the best beach communities in Palm Beach is the Manalapan enclave. Located north of Ocean Ridge, this community stretches from Boynton Inlet to the south up to East Ocean Avenue. Most of the residences that line the beachside of this community are large estates, with a few resorts and condo buildings found here as well.

You will also find a few townhomes, rowhouses, and single-family homes in the northern parts of this enclave.

Browse all Manalapan homes for sale